To 50th anniversary of Dоnetsk Institute for Physics and Engineering named after O.O.Galkin

In 60th of the last century, a tremendous upgrowth of activity and industry was observed in Donbass, the most important industrial region of Ukraine. There existed an urgent need of organization of both fundamental and applied researches maximally aimed at the meeting of requirements of the region. For this purpose, Donetsk Scientific Center of the Academy of Sciences of Ukrainian SSR was founded in 1965. One of the backbone institutions was Dоnetsk Institute for Physics and Engineering of AS of Ukrainian SSR. Establishment of the Institute has been necessitated by theoretical and experimental development of the problems of solid state physics in order to provide further technical progress in metallurgy, coal, engineering industries of Donbass region. 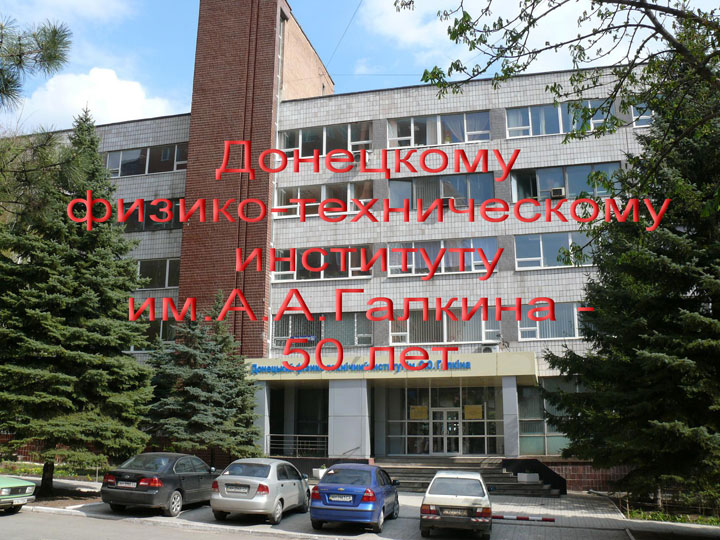 The founder of the Institute and the first director from 1965 to 1982 was Alexander Galkin, academician of the NAS of Ukraine, Dr. Sci. in Physics and Mathematics, Professor, after whom the Institute was named. Efficient recruitment, strategically correct selection of the main research lines at the stage of foundation provided rapid development and establishment of the largest academic institution in Donetsk region. Within a short time, production of cryogenic liquids was realized. This achievement allowed further development of the institute as a center of low-temperature and super-low temperature research. Complex studies of matter under extreme conditions have become a brand of the institute, including investigations employing low temperatures, high pressures and strong magnetic fields that got a world-wide fame to the institute.

Expansion and intensification of the topics of research resulted in foundation of a series of independent scientific institutions of the base of the institute that were very important for the country. These are Institute for Organic Chemistry and Coal Chemistry named after L.M. Litvinenko, Research Institute for complex automatization of the Ministry of Industry and Communication Infrastructure of USSR, Development Design Office “Luch” of the Ministry of general machinery of USSR dealing with the problems of cosmic exploration, Institute for Physics of Mining Processes of NAS of Ukraine.

Constant orientation of the team activity to solution of urgent priority problems of development of science and technology, proper administrative and personnel policy, creative work of scientists ensured rapid establishment of the institute as a center of research in the area of resonance, magnetic, superconducting, optical and mechanical properties of substance under extreme conditions.

Over the past years, the Institute multiplied scientific potential, increased the level of development, and strengthened its international reputation as a leading research center in the field of solid state physics. Its employers obtained a number of fundamental scientific results of global significance.

The most important results are:
– Discovery of a fundamentally new physical phenomenon, that is an intermediate state in antiferromagnets;
– Development of the theory of excitons, the kinetic properties of semiconductors, defects in crystals;
– Discovery and study of irreversible inducing of new states of matter by strong magnetic field;
– Development of a qualitatively new approach to obtaining physical information from the tunnel characteristics of superconductors;
– Discovery of doplerone – phonon resonance in metals;
– Invention of a new type of plastic deformation of the mesoscopic level, that is formation of local dipole bends of crystal lattice, etc.

Most of the Institute works are characterized by close connection of fundamental research with the development of application tasks. The most striking example is the research in the field of physics and technology of high pressure.

– scientific and technological basis of hydrostatic extrusion;
– fundamentals of the management of physical, mechanical and operating properties of metal materials, polymers, composites by means of high pressures;
– methods of shaping of powder products with using cold isostatic pressing;
– new principles of formation of nanocrystalline state of materials in solid samples based on the use of high hydrostatic pressure and severe plastic deformations;
– a set of results contributing to the progress in the modern scientific branches, i.e. high-temperature superconductivity, physics of strongly correlated systems, nanophysics and nanotechnologies, magnetism, optics, material structure and properties, scientific basis of designing new functional materials.

The Institute has become well known as a developer of an unique cryogenic, cryomagnetic radiospectroscopic equipment for scientific experiments and medical diagnostics equipment.

Today Dоnetsk Institute for Physics and Engineering named after O.O.Galkin is the largest academic institution in the Donetsk region. Uniting eight research departments, three departments of scientific management and auxiliary subdivisions, the Institute employs about 250 workers, with 120 researchers including one corresponding member, 18 Doctors of Sciences and 51 Ph.Ds.

The Institute maintains the current level of research lines based on existing scientific schools and develops challenging areas of physical science, namely, nanophysics and nanoelectronics, physics and technology of advanced structural and functional materials, physics of crystals in extreme conditions.

Among important fundamental research projects, the Institute performs projects aimed at development of new technologies of the production of nanomaterials, designing of thermographical devices for the cancer diagnostics and industrial equipment. The relevance and significance of the performed developments were evidenced by the fact that in the last five years, the Institute submitted over 900 applications and received 870 patents and other documents of title to inventions.

It has been a major concern of the Institute to carry out fundamental and applied researches, namely:

– study of micro- and macroscopic properties of solids under varied external effects (high and low temperatures, high pressure and mechanical loading, strong magnetic and electrical fields, high-frequency, radio-frequency and optical radiation etc.);
– development of new methods of the investigation for the mechanical, magnetic, superconducting, electrical, resonance, optical properties of the materials; study of their crystal, magnetic and electron structure; designing of the related devices and installations;
– development of the physical basis of the production of the materials with the desired properties and the production of the tests samples and low-volume production;
– implementation of the scientific results of the applied research.

High attention is paid to the training of highly qualified scientists through the post-graduate and doctoral studies and certification of high-qualified scientific personnel by the Ddissertation Council.

As a result of research activity, the staff of the Institute has published more than 80 monographs. More than 220 scientific papers in leading domestic and foreign journals are published annually. Three researchers of the Institute were given the titles of Honored Masters of Sciences and Engineering, 16 employees were awarded the State Prize in Science and Technology, 12 researchers were awarded the personal academic prizes and other awards.

In 2015, Government Institution of Donetsk Institute for Physics and Engineering named after A.A. Galkin NAS of Ukraine celebrates the 50th anniversary. Despite the existing problems and difficulties, it can be stated that the Institute will meet the anniversary with all accumulated experience and creative forces. The famous scientific schools have been working, new projects have been generated and the Institute coopts talented young researchers providing influx in skilled forces.