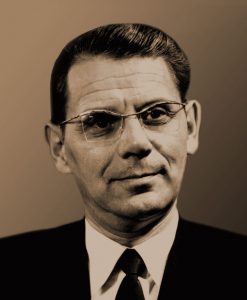 E.A. Zavadskii was born on June 2, 1927 in Millerovo, Rostov region (RSFSR). In 1955, he graduated from non-residence Dept. of Physics and Mathematics at Orsk State Teacher Institute (Orenburg region, RSFSR). In 1956, he entered postgraduate courses at Institute of Metal Physics of Ural Scientific Center of AS USSR (Sverdlovsk). After the postgraduate courses, since 1959, he worked at the institute as a junior researcher. In 1961, E.A. Zavadskii passed Ph.D. defense and took up a position as a senior researcher.

Since 1966 to the last day, all activity of E.A. Zavadskii was related to Donetsk Institute for Physics and Engineering. Here he rose through the ranks from a senior researcher at the Dept. of Radiospectroscopy (1966), Head of the Dept. of Magnetic Properties of Solids (1969), Vice-Director of Scientific Research (1978) up to the Director of the Institute (1986). Since 1997, E.A. Zavadskii worked as a councellor at the Directorate.

E.A. Zavadskii was awarded by K.D. Sinelnikov Prize of the AS of USSR (1975), two gold medals of All-Union Exhibition of Achievements of National Economy of USSR (1963, 1968).

Scientific activity of E.A. Zavadskii was multifarious. The world-class scientific results are: establishment of specific features and regularities of the effect of high pressure, strong magnetic and electric fields, low temperatures on phase states in different materials; discovery of magnetic field induction  of phases hided within the area of negative pressure; detection of metastable heterophase states in ferroelectrics; discovery of specific features of magnetic ordering and phase transitions in magnetics characterized by several order parameters; study of peculiarities of phase transitions in crystals with positional disordering; revealing of new mechanisms of formation of magnetic states in materials with delocalized carriers of magnetism etc.

E.A. Zavadskii paid a lot of attention to the training of young scientists. In 1966 – 2005 he taught at the Dept. of Physics, Donetsk National University. When working at Donetsk Institute for Physics and Engineering, he founded scientific school of physics of phase transformations under extreme. The research lines started by E.A. Zavadskii have been still in progress due to his students. Four Doctors of Sciences and 21 Ph.Ds are among them.

E.A. Zavadskii was Editor-in-Chief of «High Pressure Physics and Technics» since 1991, when the journal was founded, to 1998.

E.A. Zavadskii is an author of more than 189 scientific works including three monographs that are of great current interest: