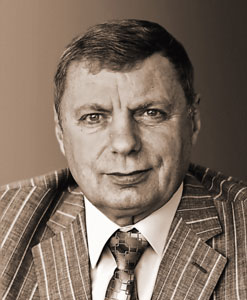 Winner of academic awards named after G.V. Kurdyumov (2002) and I.N. Frantsevich (2011). In 2010, scientific community of Russian Federation awarded Medal of Honour for Transcendent Merit in Physical Material Science after academician G.V. Kurdyumov to him. In 2022 he was awarded the State award of the Donetsk People’s Republic – the medal “For Labor Valor”.

Founder of scientific school of nanophysics and nanotechnologies at DonIPE.

Being the youngest director at the Academy of Sciences of Ukraine, he headed the institute at a difficult moment for the country and the science. Due to proactive attitude, unity of purpose,  hard-working nature he came off rising crisis trends in the life of the institute, retained the scientific staff, renovated the spirit of creativity. Being the Director, Viktor Nikolaevich formed atmosphere of creativeness, solved a lot of complex problems of organization to provide remained and reinforced positions of the Institute in the branch of physics of high pressure.

He is known by pioneer work in the area of Physics of high pressure, metal physics, superconductivity, physics of nanomaterials.

Scientific activity of V.N. Varyukhin is related to the study of the behavior of the materials under high pressure, design of technologies and equipment on this basis. It is characterized by organic combination of fundamental problems to be solved and practical application of the obtained results. As results of his researches, dissipative phenomena in stressed inhomogeneous crystals were studied and the theory of their plasticity was derived; the mechanisms of deformation and fracture of functional materials of different nature were identified. V.N. Varyukhin contributed much to design of physical basis of material science of high-nitrogen austenitic steels. Promising methods of production of finished and semifinished products characterized by a high level of physical and mechanical properties were put into practice. A series of works related to structural modification of polymers allowed finding new physical phenomena and development of technological processes to obtain materials with enhanced or new features. The technologies of production of varied shape memory items including those with irreversible increase in volume should be mentioned here.

V.N. Varyukhin headed extensive studies of new methods of formation of nanocrystal states in materials and fixation of the conditions of their stability. He developed a new approach to formation of a nanocrystal state of functional materials by high pressure that attracted an attention of world scientific community.  This achievement was confirmed by contracts with well-known organizations like “Los Alamos National Laboratory”, “General Electric”, “Boeing” (USA) etc.

Head of a research area at SCST of Ukraine (1991 — 1996). Research supervisor of a number of scientific projects within the frameworks of targeted programs of state and departmental range, joint projects of Russian Fund of Fundamental Research. Member of Expert Board of Committee of State Prizes of Ukraine in Science and Technics (2010 — 2014).

V.N. Varyukhin is the author of more than 20 monographs and textbooks, more than 390 scientific papers, 45 patents. 4 Doctors of Sci. and 8 Ph. Doctors are his students. He initiated organization of Department of theoretical physics and nanotechnologies at Faculty for Physics and Engineering of Donetsk National University and headed it since 2008 to 2020. His authority as a scientist is confirmed by the facts of membership of editorial boards of a number of homeland and international journals, participation in organization and program committees of international conferences and reports as an invited speaker.