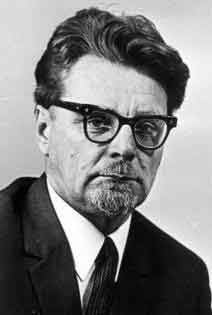 Alexandr Alexandrovich Galkin was an outstanding scientist, physicist and experimentalist. The results of his fundamental researches contributed to the progress in a number of branches of physics: superconductivity, electron properties of metals, radiospectroscopy, magnetism, strength and plasticity.

A.A. Galkin was born in Berdyansk (Ukraine). In 1939, he graduated from Kharkov State University. He was a participant in the Great Patriotic War. In 1937–1941 and 1945–1960, he worked at Kharkov Institute of Physics and Technology of the AS of USSR. In 1960–1965, he was a deputy director of Institute for Low Temperature Physics and Engineering of the AS of USSR (Kharkov). Since 1965 to 1982, A.A. Galkin was the director of Donetsk Institute for Physics and Engineering.

A unique style of Alexandr Alexandrovich individualized his scientific work. Alexandr Alexandrovich Galkin was a person of inquiring mind and unexhausted energy, high responsibility. He was especially particular about the level of scientific research, being well-oriented in new branches of physics. His works are noted for organic combination of fundamental theory and filigree experiment, width of generalization, original scientific approach. His scientific intuition and ability to consider a problem as a whole were amazing as well as insight in the evolution of physics. He was a researcher of fundamental understanding and love of science.

The spectrum of research interests of Alexandr Alexandrovich was immensely wide. Under the guidance and with direct involvement of A.A. Galkin, for the first time, the detecting properties of superconductors were found; the kinetics of destruction of superconductivity in high-frequency fields was studied; the crystallographic anisotropy of the energy gap of a superconductor was found and investigated. He made a great contribution to the progress in technical application of superconductivity and creation of criomagnetic complexes based on superconducting systems.

Being one of the founders of radiospectroscopy in Ukraine, А.А. Galkin was among the first who applied the methods of cyclotron resonance and magnetoacoustics to the study of the electron properties of metals. He discovered Doppleron-phonon resonance in metals, Rashba resonance in semiconductors.  Under his supervision and through his high mediation, the researchers started the application of magnetoacoustics, tunnel spectroscopy, electron paramagnetic resonance, antiferromagnetic resonance, nuclear magnetic resonance in the conditions of low temperature and high pressures for the first time. These methods were applied to the study of pressure dependences of electron-phonon interaction and interaction of paramagnetic ions.  In 1971, A.A. Galkin was awarded by the State Prize of USSR in Science and Technics for the finding of an intermediate state in antiferromagnetics. His works on the study of a new state of the material induced by strong magnetic field were the first awarded by K.D. Sinelnikov Prize of the AS of USSR.

A.A. Galkin was a talented institutor of physics and science in Ukraine. He participated in foundation of powerful institutes such as Institute of Radio Electronics of AS of USSR, Institute for Low Temperature Physics and Engineering of AS of USSR. His lifetime project was foundation and management of Donetsk Institute for Physics and Engineering. Since 1965 to 1982, A.A. Galkin was the director of the Institute that was named after him later. At the time when the Institute was founded, the structure included 13 research departments.  The area of research activity was related to the most pressing challenges of the solid state physics. Efficient recruitment, strategically correct selection of the main research lines at the stage of foundation provided rapid development and establishment of the largest academic institution in Donetsk region. Within a short time, production of cryogenic liquids was realized. This achievement allowed further development of the institute as a center of low-temperature and super-low temperature research. Complex studies of matter under extreme conditions have become a brand of the institute, including investigations employing low temperatures, high pressures and strong magnetic fields that got a world-wide fame to the institute.

Expansion and intensification of the topics of research resulted in foundation of a series of independent scientific institutions of the base of the institute that were very important for the country. These are Institute for Organic Chemistry and Coal Chemistry of AS of USSR, Research Institute for Complex Automatization of the Ministry of Industry and Communication Infrastructure of USSR, Development Design Office “Luch” of the Ministry of general machinery of USSR dealing with the problems of cosmic exploration, Institute for Physics of Mining Processes of NAS of Ukraine.

Since 1994, Donetsk Institute for Physics and Engineering has been named after A.A. Galkin, the first Director, academician.